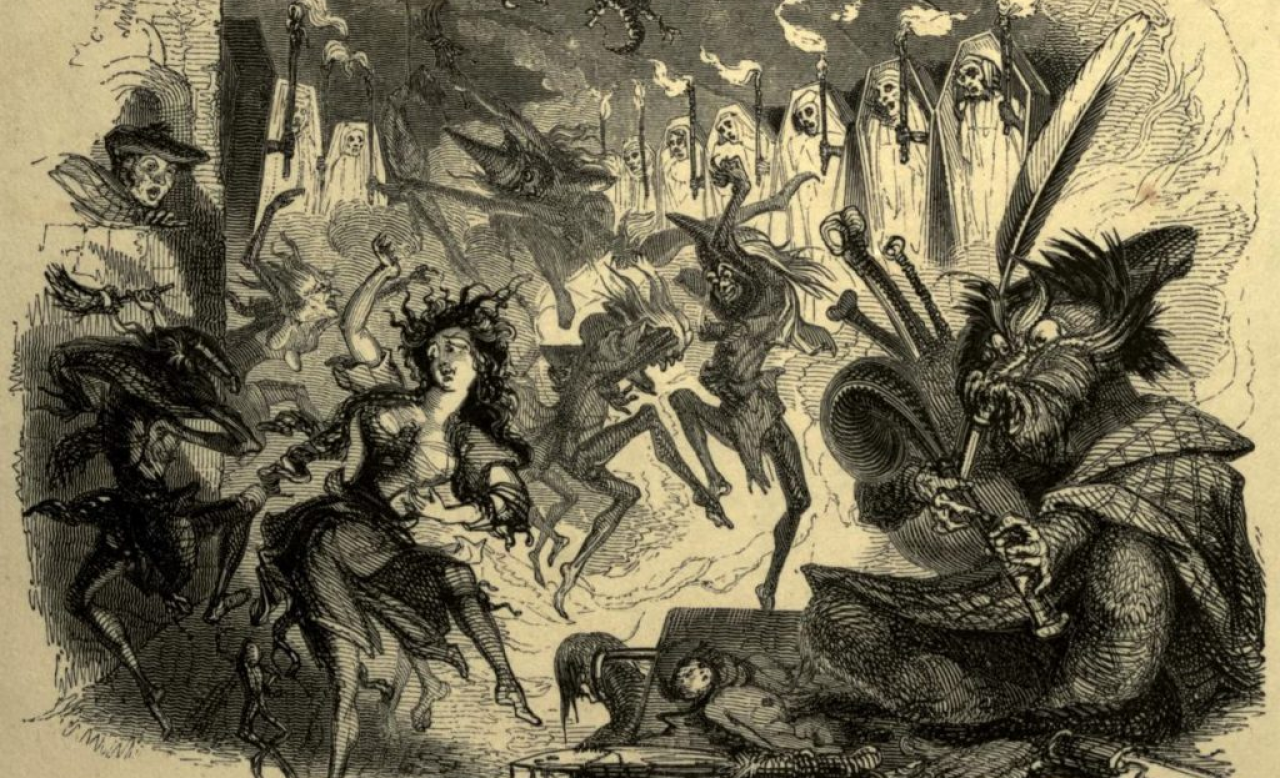 Just because Scotland is a country considered Celtic, does not mean that Scotland’s culture is indicative of a wider Celtic one, nor does it indicate that it is representative of Celtic culture as a whole. Scotland just happens to be considered a ‘Celtic’ nation by means of language, not necessarily culture.

Wales and Ireland are also considered Celtic, but, this does not mean that they also wore the kilt simply for being in proximity to Scotland, or, also being considered ‘Celtic’. The ancient Irish wore a garment called the lein-croich, a type of long tunic that was worn belted at the waist and usually of a single color. The ancient Scots also wore this garment, called the yellow battle shirt, though they would have worn the great plaid above this. The Welsh male does not have a national garment, which is the main reason that some Welsh people have attempted to co-opt the national dress of Scotland, using pseudo history, and two single examples of a figure wearing a long belted tunic as an example of the kilt, which they call the cilt. Which only further hints at their utter lack of understanding of the history of the Kilt, as the word Kilt, applies only to the modern Scottish national dress, not the ancient progenitor of said dress, the Great Plaid (filleadh mhòr).

And little do they realize, that the kilt as we know it today, is far removed from its progenitor, the Great Plaid (filleadh mhòr), which was a versatile outfit that served a variety of functions to its Scottish wearers; a cloak, tent, bedding, and if folded properly, could also be used to carry items on the person in the form of overlapping pockets and recesses.

The modern kilt as it stands, was adapted from the Great Plaid (From ‘pladjer’-the Gaelic for blanket) sometime in the 1600’s, and there are various theories as to who re-designed it and where this adaption occurred, but that is beyond the point, the kilt as we know it, is of a modern design, and from the modern era of Scotland. So the example put forward by the Welsh in regards to their claim of ownership of the Kilt is as redundant as it is nonsensical, for the kilt as we know it, did not yet exist in its current form, and so again, any outfit put forward as proof of the Irish/Welsh, or anyone else for that matter, having worn the outfit, is completely unfounded.

A version of the filleadh bheag (philibeg), or small kilt, similar to the modern kilt, in one example of the origin of the modern kilt, is said to have been invented by an English Quaker from Lancashire named Thomas Rawlinson. He felt that the Great Plaid, or Belted Plaid, was “cumbrous and unwieldy“, and his solution was to separate the skirt and convert it into a distinct garment with pleats already sewn. His associate, Iain MacDonnell, chief of the MacDonnells of Inverness, begun wearing it, and when his fellow clansmen, employed in logging, charcoal manufacture, and iron smelting, saw their esteemed chief wearing that new attire, soon followed suit. From there its use spread “in the shortest space” amongst the Highland Scots, and even among the Lowlanders. And so, I see no evidence of the modern kilt having originated anywhere else, but Scotland.

Similarly, the kilt in its current form has many articles of clothing attached to it, such as the sporran, fly plaid (Which replaced that portion of the Great Plaid that was worn across the chest and over the shoulder) Sgian dubh, and the hose, to name but a few of the most recognizable of these attachments. And there is no doubt that these articles of attire are solely the creation of Scotland, and subsequently its culture, as they were applied to the national dress by the Scottish in what would be considered a relatively modern era. So in the confirmed authenticity of these articles of attire being Scottish in origin, and in turn, the national dress of Scotland being solely unique to Scotland and having come about in the modern era, we can be in no doubt. The ancient Welsh and Irish simply never wore the Kilt.

The Breakdown-Clans, tartans, and the Kilt

Until the middle of the nineteenth century, tartans were only associated with regions or districts, rather than any specific Scottish clan or territory. This was because the designs were produced by local weavers for local tastes, and would usually use only those natural dyes available to them in their particular area.

And so, as many quite rightly point out, the use of Tartan to denote to any particular clan is also a relatively modern tradition, but in acknowledging that, one must surely then understand that if that is so, and the Tartan clan identifier’s place is a new tradition within Scotland’s culture, and of that we can be absolutely certain of, then we are assured that the use of it in the so called Welsh family tartans, and the Welsh cilt, are utterly superfluous, and again have no basis in reality, and are simply a wholesale copying of the Scottish national dress, rather than any representation of an existing, ancient form of clothing. There is absolutely no authentic records of any Welsh or Irish tartans, ancient or otherwise, in existence.

The Dress Act of 1746 attempted to bring the Scottish Highland clans under government control by banning the tartan and other aspects of Scottish culture. When the law was repealed in 1782, it was no longer everyday Highland wear, but was adopted instead as the symbolic national dress of Scotland as a whole. There was no such law in Wales, or Ireland during this time.

And on the matter of Clans being an integral part of Scottish culture, and not one of Celtic culture as a whole, and by that I mean Irish or Welsh; the Picts had a Clann system of their own, which dominated Scottish society for 800 years. In the words of Forbes MacGregor: “There were clans among the Picts before 537AD, the date of the death of King Arthur, but they were of a different nature than the Highland clans of Scotland, though no doubt the idea was the same and the word Clann, meaning children, described them“.

And in the words of Matthew Newsome: “The idea that Irish families might have tartans did not come about until the twentieth century. In 1977 the late William H. Johnston supposedly gave the Scottish Tartans Society information on a number of Irish name tartans that he found in an 1880 book called Clans Originaux held by the Pendleton Woolen Mills in Oregon. It was supposed to be the earliest record of Irish tartans. However in 2003 members of the Scottish Tartans Authority were allowed to examine photos of the book only to find that it included only well-known Scottish tartans and no Irish named tartans at all”

So even if the Welsh and Irish had worn a type of ‘kilt’, it never would have resembled the modern Scottish Kilt that they are trying to appropriate today. For example, the Sgian dubh (the small knife worn in the hose) originated from the Highlanders concealing one such weapon on their person, as carrying any weapon was outlawed in the Scottish Highlands. And as far as I’ am aware, the Welsh concealed in a manner, no such blade. So why then, would they wear it on their so called ‘cilt’?

The sporran also has a long pedigree within Scotland, and dates back well into the 1500-1600’s hundreds, when the kilt was still more appropriately termed a Great Plaid. There are accounts from at least the early 1500’s of Scots wearing both the sporran and the Great Plaid during that era, with other examples being captured in detailed accounts and sketching’s from the period. For example, a German print from 1630’s clearly shows a group of Scottish warriors dressed in Great Plaids, the skirts of which have been arranged to hang to the knee, much in the same way as the modern kilt. 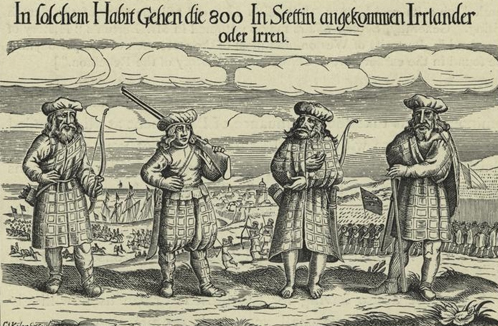 And as far as I’m aware, no other example of any culture wearing a Great Plaid has been found. So why then; would the Welsh or Irish wear the Sporran, Sgian dubh, Fly Plaid etc, to accompany their Scottish national dress? It simply makes no traditional sense! Unless of course, they are not in fact wearing a national dress with historic roots within their own cultures and are instead, wearing a garment of Scottish design, simply because it is instantly recognizable as being ‘Celtic’. So, by wearing what is essentially the Scottish national dress, in all its completeness, the Welsh and Irish are simply co-opting an icon of modern Scotland’s culture, which in its current form has no historical roots within any other culture other than that of Scotland.

The Welsh, having no documented male national dress, and therefore, much as the Irish attempted during their cultural revival at the turn of the century, are seeking to distinguish themselves from the English by using a symbol that is globally recognizable as being ‘Celtic‘, because of its association with Scotland, which just so happens to be considered a ‘Celtic‘ country. Simply put, they are trying to emphasize their Celtic heritage by co-opting another country’s tradition and culture.

Whilst a garment that has often been mistaken for the kilt in early depictions, is the aforementioned lein-croich, which is again, a long tunic traditionally made from a solid color cloth, usually black, green or saffron and belted at the waist. Solid colored kilts were first adopted by Irish nationalists during their cultural revival as stated above, and thereafter by Irish regiments serving in the British Army. They could often be seen in early 20th century photographs from Ireland as well, especially at political and musical gatherings, as the kilt was adopted as a symbol of Gaelic nationalism in Ireland during this period, with no regard to the lack of any historical merit. Simply put, they adopted Scotland’s national dress because again, it is universally (Though wrongly) recognizable as being ‘Celtic‘, although having relatively little to do with ‘Celtic‘ culture as a whole, other than vaguely resembling a lein-croich; Long shirt, I.e; a Belted tunic.

Some factlets on the Kilts ancient pedigree within Scotland

The earliest example of Tartan is found on a fragment of clothing, dating to the 3rd century, which was found in Stirling, Scotland.

Tacitus, scribe and son-in-law to Agricola, wrote in AD79 “the Caledonians wore kilts of primitive tartans” Caledonians being the ancestors of the people who would come to be known as the Picts, and eventually the Scots (Along with the Gaels of Dal Riada).

Matthew Newsome, concerning the idea of Irish Kilts and tartans, writes: “The Irish kilts and tartans he speaks of are supplied by MacNaughtons (The House of Edgar) in Pitlochry Scotland (not “Pillockey”), and that is for one very good reason. They were introduced by that firm in 1996 as a new line of fashion tartans, and they have the sole rights to produce those Irish County tartans. This just shows how new a thing this is”

And finally, here is an account from an author, who wrote before the year 1597, in an account titled: Certayne mattere concerning Scotland.

“They delight in marbled cloths, especially that have long stripes of sundrie colours; they love cheifly purple and blue; their predecessors used short mantles, or plaids of divers colours, sundrie ways divided, and among some the same custom is observed to this day; but, for the most part now, they are brown, most near to the colour of the hadder (heather), to the effect when the lye among the hadders, the bright colour of their plaids shall not betray them, with the which, rather coloured than clad, they suffer the most cruel tempests that blow in the open fields, in such sort, that in a night of snow they sleep sound”

2 thoughts on “In defence of my culture” 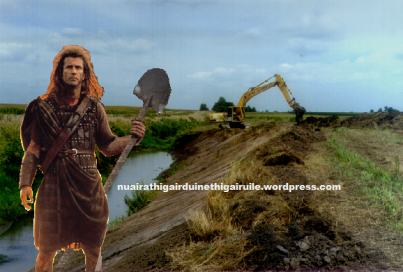 Wallace and his shovel 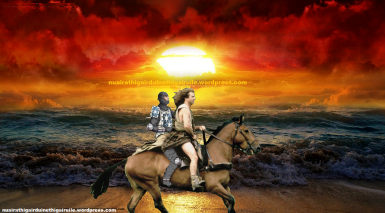 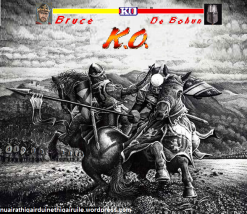 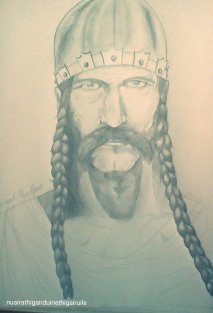 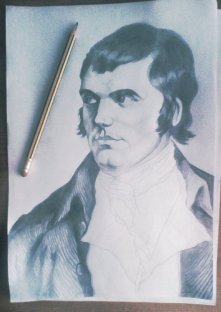 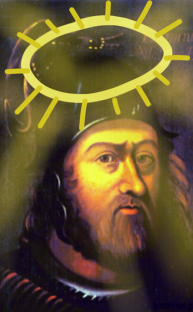 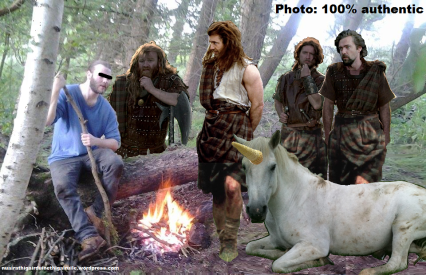 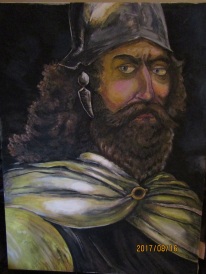